For many of us, blackjack is one of the best games to play when we go to the casino. That can be because of the low house edge, which makes it one of the most realistic games for you to win with when at the casino. As well as that, the speed of the game, the thrill of the unknown with the dealers’ hand and the quick decision making of whether to stick or twist combines to make blackjack enthralling and fun in equal measure.

It’s a fairly simple game to play; you are dealt two cards and the idea is to get a total of 21, if not the closest wins out of you and the dealer. After receiving two cards you can choose to stick or twist — if you twist and go over 21 you are bust. Simple.

However, when you are dealt two of the same card, a pair, you get the chance to split. Here at Lucky Nugget Casino we will analyse whether you should split, what the benefits are and whether it is worthwhile for the players who are ready to take us on at the table.

It should hold you in good stead next time you hit the tables! So, we’ll start by giving you a brief outline of what splitting is.

As mentioned, when you get two of the same card it is called a pair, and that gives the player the chance to split them and get a new hand. A split means that you are dealt two more cards and your bet is doubled. Essentially you then have two hands to beat the dealer with – or lose, hence why some people don’t split.

Of course, you never have to split, but in certain situations it would be the right move. We will analyse the different scenarios and give you advice on what to do.

When you should split

The golden rule and the most obvious one when it comes to splitting, whether you are a novice or a seasoned player is always split aces. Always. In this scenario, it is even irrelevant what the dealer has, you just split.

The value of an ace is eleven or 1, so by splitting you are increasing your chance to win. It gives you four chances of getting 21 and winning.

So, getting two aces is a good hand, and you make it better by splitting. Simple.

As well as aces, you should always split 8’s, and again the reasoning behind it is fairly obvious. If you don’t split, you are left with a hand of 16. Very tricky.

If you twist, there is a higher chance that you’ll end up going bust, with anything above a five resulting in an instant loss. So by splitting you are reducing that chance of a crashing out and you will use the new hand to reach a higher score.

Just another tip, if you are dealt a second pair of aces or 8’s with your new hand, you can split again – and you should.

While there are ways to split, there are also times you should steer well clear, and there’s no better example than 10s – but we hope you already knew that!

Having 20 is an excellent hand, only an ace will hit the magic 21, so this is more for the beginners out there. Clearly, the chances of splitting 10’s and ending up with a better hand than 20 are slim, so don’t take the risk, hold tight and the dealer will have to struggle.

As well as 10s, it’s never wise to split 4s or 5s and again the logic is straightforward. With 4s and 5s, you will never go bust on the next card you are dealt. So why split? You are just doubling your wager and it isn’t a necessity, just keep playing.

Likewise, with 6s, okay you could go bust, but you need a card with the value of a 10, which would be unfortunate with the pack to choose from, however, 6s aren’t as clear cut as the others, so it would be a more understandable decision if you split. 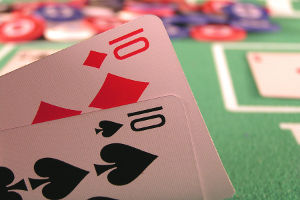 While all the hands we have mentioned have perfect logic behind them and we would hope you would agree that and follow, there are some hands that are far more difficult, notably 7s.

With 14 on show, there is statistically more chance that you will go bust, however, if the dealer has a low card on show it is worth splitting because you can hope his overall score will be low. If he has a high card, generally 8 or above, it is probably worth taking the hit and hoping that you get the hand that you need.

Overall, blackjack is a fun game and requires the players to think quickly and make educated decisions. If you break things down it can be easy to see when you should split, and when you shouldn’t however, under the pressure of a blackjack table you might not make the correct call. So follow our advice, have it ingrained into your play and then you will increase your chances of coming out on top. Good luck!